​According to the Centers for Disease Control and Prevention ([CDC], 2018), sudden unexpected infant deaths (SUID) refers to: 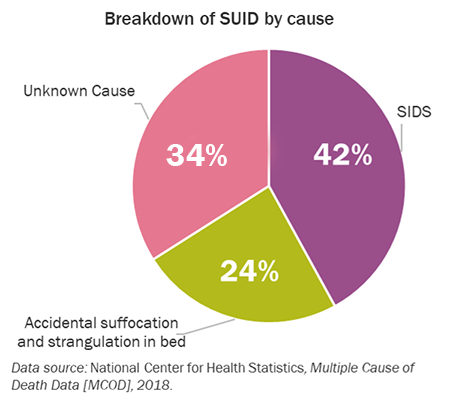 Each year in the United States, approximately 3,500 infants die suddenly and unexpectedly. The frightening fact about SUID is that it can happen without warning and to infants who seem otherwise healthy.

SUID rates per 100,000 live births in American Indian/Alaska Native (AI/AN) and black infants are more than twice those of white, Hispanic and Asian/Pacific Islander (A/PI) infants. The graph below illustrates racial/ethnic differences in SUID rates. 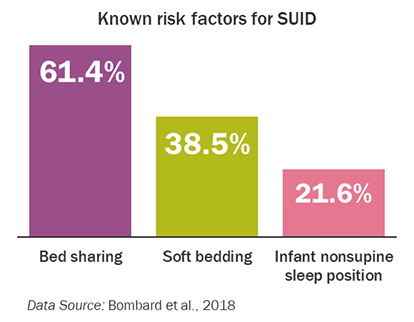 Although it is not fully understood why infants die suddenly and unexpectedly, several factors have been attributed to suffocation and strangulation in bed due to unsafe sleeping conditions. Infants sleeping on their stomachs, use of soft bedding (e.g., blankets, pillows, and bumper pads), bed sharing, exposure to smoking, caregiver alcohol use, and caregiver drug use are risk factors for SUID (Moon, 2016; Moon, Hauck, & Colson, 2016).

Unsafe sleep practices are higher among mothers in minority racial/ethnic groups, younger than 25 years of age, and with less than or equal to 12 years of education, suggesting that clear and culturally appropriate interventions are needed to reach these populations.

A recent study using the 2004 to 2014 data from the National Center for Fatality Review and Prevention Child Death Review Case Reporting System found that 13.1% of infant sleep-related deaths occurred under non-parental supervision (Lagon, Moon, & Colvin, 2018). Infants who died during non-parental supervision were placed in unsafe sleep positions, such as on their stomachs, or in unsafe locations, such as couches. These findings underscore the importance of educating all caretakers – babysitters, relatives, and friends – on known risk factors.

Another resource is the Safe to Sleep campaign (formerly known as the Back to Sleep campaign), a collaboration between the CDC and National Institute of Child Health and Human Development (NICHD). The campaign provides education and strategies to reduce SUID to caregivers, health care providers, and others. Information and educational materials about sharing safe sleep messages and reducing SUID are available on NICHD’s website.