This blog post and infographic originally appeared on the Promote Prevent blog and has been reposted on CSN's website with permission. The infographic is at the bottom of the page.

In the age of smartphones, teens are so immersed in media that it may seem hard to get their attention. SAMHSA recently found that one in five parents of teens didn’t think they had much influence on whether their teen used substances. Even worse, one in ten parents of teens hadn’t spoken to their child about substance use within the past year.

The thing is – parents actually do play a huge role in whether their children end up abusing substances. Kids who learn about the dangers of prescription drug abuse from their parents were significantly less likely to use substances than those who did not.

According to the CDC, we are in the midst of a prescription drug abuse epidemic. Prescription painkiller overdoses claim the lives of nearly 15,000 people every year, more than the number of heroin and cocaine overdose deaths combined. Teens are particularly vulnerable to prescription drug abuse because the drugs are easy to obtain and falsely believed to be safer than street drugs. One in ten teens and young adults between ages 14 and 20 admitted to misusing prescription pain killers within the past year. Nearly one in four teens reported misusing or abusing a prescription drug during their lifetime. Prescription medications are the drug-of-choice for 12- and 13-year-olds, abused more commonly than any other drug.

No one wants to believe that their child is using alcohol or drugs. The truth is that parents are often mistaken about their children’s substance use, and prescription drug abuse is no different. In a recent survey, 10 percent of teens admitted to either misusing or abusing medication in the past six months, but only 6 percent of parents of teens said their child abused medications. The National Poll on Children’s Health found that there were ten times as many children using “study drugs” (such as Adderall or Ritalin) as parents who reported their child using them.

Not only do parents not know that their child is misusing prescription drugs, many parents aren’t too concerned about it. The PATS Survey found that many teens and parents mistakenly thought that prescription drugs were safer than street drugs, and nearly a quarter of teens reported that their parents would be less angry if they were caught with prescription drugs than with illegal drugs. 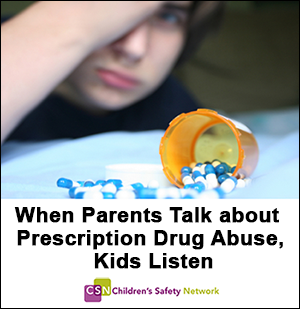 Parents need to talk to their children about prescription drug abuse

Multiple studies have shown that teens of parents with a lax attitude about drug use are far more likely to end up using drugs. PATS found that of the teens who said that their parents don’t care as much about prescription drug use (compared to illegal drug use), 32 percent had used unprescribed medication in their lifetime, higher than the 24 percent average and the 20 percent of teens who said their parents cared as much.

“Surveys of teens repeatedly show that parents can make an enormous difference in influencing their children’s perceptions of tobacco, alcohol, or illicit drug use,” said SAMHSA Administrator Pamela Hyde. So talk to your kids about prescription drug abuse – they’ll listen.

How should you talk to your kids about prescription drug abuse? We’ve compiled these resources:

This blog post and infographic was written by Promote Prevent for Promote Prevent and has been reposted on CSN’s website with permission. The views expressed in this post are those of the author and do not necessarily represent the position of the Children's Safety Network.